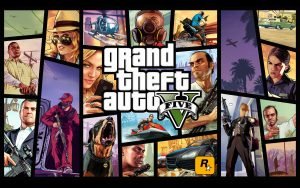 There are very few if any entertainment properties that exist at the level that Take-Two Interactives Grand Theft Auto series is at in prestige and sales. In fact Grand Theft Auto may just exist in a universe that no other property will ever reach. For those who don´t know they will say my statements are hyperbole. Those who do know will say I need to make my statements bolder. I may have to lean into the later because at 130,000,000 million sold. Grand Theft Auto 5 is the granddaddy of gaming in terms of sales. Not to mention, it is a fantastic example of online community gaming. The milestone is significant because it solidifies ś gaming as the most powerful form of entertainment that exists right now. The sales of the game are still happening alongside free give-aways of the game on platforms like Epic Games store. Still GTA5 keeps on being a juggernaut for Take-Two Interactive.  All that can be said is wow. A game released 8 years ago still has fresh legs is remarkable. Giving ground that replayability is the holy grail of gaming. If you can create a title that keeps gamers coming back for more, then you have a certified hit. Grand Theft Auto 5 redefines that term, and we are all witnesses.